In Vietnamese it’s “phở bò” or sometimes known as Vietnamese beef noodle soup for people that don’t make it out much.

And guess what’s for breakfast or brunch? Yeah, that’s right…phở! This not usually a dinner time meal. I saw a ton of stalls in Vietnam in the wee early morning dishing out this little bit of heaven and some Cafe Du Monde on the side. It was downright the slice of life. Yeah, honest. That’s how we roll in the early morning of Saigon.

I have been meaning to write this Pho recipe for such a long time but life got in the way. And when I say a long time, I mean a loooong time. Four years in fact. “C’est la vie”. Which makes sense since the French gave the Vietnamese the “method” and it’s a great excuse for not posting sooner.

This is Pho recipe can definitely rival any restaurant. It’s also cleaner and I know where my ingredients come from and how they are handled. The recipe has been adapted from a few well known cookbooks. It lives up to my expectations of myself (which are huge) and the memories I had in Vietnam. Make it for your mẹ or bà nội. Test it and see.

Simmer for an hour. As it simmers, and like all stocks, you need to start skimming. After a lot of skimming and at the end of an hour or so the foam and residue should disappear. You are safe now to simmer for another 4 hours. There will be some water loss and that’s ok.

Now put the bones and liquid into a crock-pot on low. Let that do it’s thing for about 8 hours. Let cool and toss the bones (save the tendon if there is any) and drain the stock through a sieve a couple times. What you end up with is a clean Pho Go stock – this is stock, not broth or soup yet.

Here we go! Put the stock in a, well, stock pot on simmer. Now it’s time to add the aromatics that will give your Pho stock that classic Vietnamese taste.

I roast these for about twenty minutes, turning them every five. I want to see some charred skin here. The onion and the ginger will sweeten up a bit and that roasted flavor will impart itself into the Pho. Once the roasting is done I peel the ginger and remove the burnt skins from the onion. I give them a little chop and put them in the stock as well.

Let everything simmer for about an hour. Remove the cheesecloth of aromatics, onion and ginger. You did it! You have Pho Bo broth.

Now pick a size of rice noodles you like and hydrate them so they will be soft and chewy when you pour the broth over them.

You can add traditional Phở Bò ingredients like cilantro, basil, bean sprouts, limes, peppers and spring onions. You can even add shaved strips of seasoned sirloin, Rau Răm, sawtooth coriander, whatever you like! 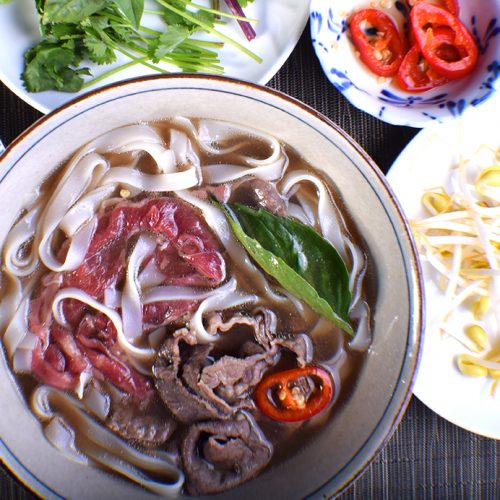 What's in Your Pho Bo:

Season with a little white pepper, garlic powder and a dash of fish sauce. Most importantly, eat it with someone you love.