Back when things were still fairly unconnected I grabbed my backpack and headed to Spain. It was an interesting time of finding out a bit more of who I was. I called my buddy from France we traveled from north to south and ate everything along the way. It was when we landed in Seville that I had my first proper gazpacho.

From there I ran through a dozen gazpacho recipes. Some gazpacho too soupy, some too similar to Pico de Gallo. It took me a few months but I finally managed to craft a strong contender in the land of gazpachos. It has strong Spanish flavors and subtle Middle Eastern notes.

The Three Tenets for a Gazpacho Recipe

Make gazpacho in the summer months. It’s refreshing and perfect for a brunch or late lunch. And don’t forget, there are generally three tenets for a fantastic gazpacho recipe:

Home-grown tomatoes, farmer’s market variety or even Wholefoods are absolutely critical. The color, citric acid and sugars are paramount in order to create a stellar Gazpacho. Again, this is the foundation of the entire soup. Don’t mess it up this early by buying cardboard or canned tomatoes.

You must have a cucumber that is in season – the kind that is never bitter, plenty of juice, crisp and just Dougy fresh. Fresh is the word.

This imparts some serious herbal notes into the soup. I don’t like to over do it and have a medicinal taste so using a sprig or so will marry the bitter, fragrant herb with the citric acid in the gazpacho. The cumin adds an equally distinct flavor that is unparalleled which is why so many cultures use it.

In the end you will have sour (citric acids), sweet (sugars), bitter, salty, cold combination that really satisfies you on that hot summer day. It’s a nice cool blanket of deliciousness wrapped around your belly. Add in a bottle of Viognier and you’re set. 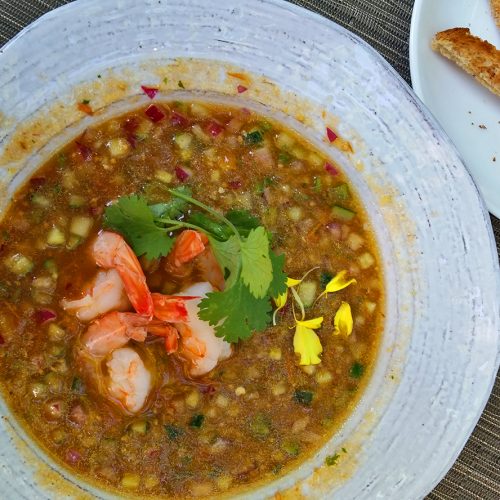